Will north and south Cyprus be reunified?

Each week we receive enquiries from potential North Cyprus property buyers asking this question.  Will north and south Cyprus be reunified? They want to know if divided Cyprus will be reunified, whether we feel there will be a “solution” to the “Cyprus Problem” and whether this will increase the value of their property if they purchase a North Cyprus Property.

Firstly, before we deal with the property issue, we must stress that the true answer is that of course no-one really knows yet whether or not Cyprus will be reunified. And the reason no-one knows is that many people are not actually convinced that a reunification IS the best “solution”, nor that it is currently actually a “problem” having two separate sides! Despite widespread lobbying for a new federal solution from multinational oil companies and EU/UN, all of whom have their own vested financial or political interests, the reunification of Cyprus has been elusive for over 40 years. One reason for this is that people on the two sides of the border see the history and causes of the divided island very differently. The excellent article below, explains how these polarised viewpoints have come about – and at the end, we offer our own opinion on the likely effects on North Cyprus property values of reunification.

There are many questions often asked: Was North Cyprus invaded or was a worse war averted by legitimate Turkish intervention to protect the Turkish Cypriots? Did the Greek or Turkish Cypriots start the war? And is it a good idea to reunify a peaceful island where the two peoples with different languages, religions and cultures are really living perfectly happily apart? We at North Cyprus International are pleased to reproduce most of this excellent article by eminent Turkish journalist Yusuf Kanli as our best answer to understanding the Cyprus history and root cause of these questions – and we hope that you enjoy reading it.

What is the Cyprus problem?

For totally different reasons, the two peoples of Cyprus consider the status quo as unacceptable. To heal any condition, there is an absolute need to make a proper prognosis and an accurate diagnosis. What is the Cyprus problem? Before this question is adequately and accurately answered, a resolution will not be possible.

Is the Cyprus problem one of military intervention? Or is it a problem of occupation? Is it one of the refugees and displaced people? Can it be a problem of lost properties? All these and various others are very important, but they are not the “root cause” of the conundrum which has been defying all resolution efforts since the 1968 start of the Cyprus talks process. They are some of the by-products of the problem. 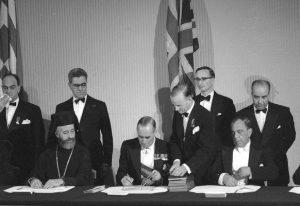 Dr. Fazıl Küçük and Makarios at the signing of the agreement in 1960.

The Cyprus problem stems from the question of how to share power and sovereignty between the two politically equal communities of Cyprus: the Greek and Turkish Cypriot people. It was these two communities – with the help and guidance of Turkey, Greece and colonial power Britain – who decided to establish the Republic of Cyprus in 1960 as an effective federation.

The Turkish Cypriot people did not betray their treaty or constitutional commitments.  However, for Greek Cypriots, the 1960 republic was just a stepping stone in their quest to achieve “Enosis,” or union, with Greece. Archbishop Makarios III, the Greek Cypriot leader who became the president of the new state, was loyal to the 1950 “Enosis” plebiscite orchestrated by Makarios II and considered independence from Britain as a development that brought Greek Cypriots a step closer to achieving the aim of annexation to Greece.

Makarios III – who succeeded Makarios II as the archbishop of the Church of Cyprus – made his first and last visit to Ankara as the president of the effective federated Cyprus Republic between Nov. 22 and 26, 1962.

Makarios wants it all:

There were two main items on Makarios’ agenda in Ankara: 1) A proposal for an amendment to be made in the Cypriot constitution and 2) a quest for Turkey’s help to overcome an acute water shortage on the island.

He wanted to feel the pulse of Turkey, one of the three guarantor powers along with Greece and Britain, before taking any action.

That is, the aim was to eradicate the “effective federation” character of the Republic of Cyprus and transform it into a Greek state with a privileged Turkish minority. Turkish Cypriots opposed this, Ankara stood behind the Turkish Cypriots and on the night of Dec. 20-21, Greek Cypriots started implementing the so-called “Akritas” plan in the Tahtakale district of Nicosia with the intention of eradicating all Turkish Cypriots from the island in less than 24 hours or before Turkey could take any action to defend the Turkish Cypriots.

The Turkish Cypriots resisted. They continued their resistance until July 1974 when supporters of union with Greece staged a coup after becoming frustrated with the failure of the Makarios regime to overcome the “Turkish Cypriot obstacle,” igniting a civil war among Greek Cypriots. Hundreds of leftists and opponents of union with Greece were tortured, murdered in cold blood or even buried alive. Turkish intervention saved Turkish Cypriots from a very serious existential threat but it also put a full stop to the vicious slaughter campaign by enosis supporters of everyone that stood against their wild dream.

A settlement to the Cyprus problem is possible only if the correct diagnosis is made and the acute psychological disorder – which was demonstrated with the latest legislation to commemorate enosis in schools – in the Greek Cypriot community is healed. “Taksim” or “Division” of the island between Greece and Turkey, or northern Cyprus becoming a province of Turkey, is an equally problematic social disorder, but thank God it is not as acute as the enosis disorder on the Greek side.

The recent past of the island, anyhow, demonstrates that even if a common future under a federal roof might be desired by the political leaders of the two sides, as long as bad aspirations, hallucinations and utopias remain dormant, the best possible settlement might perhaps be the side-by-side coexistence of two Cypriot states under the EU umbrella. The best way out of this quagmire might be for one side to make territorial concessions and the other to share the territory and sovereignty of the island with the “other half.”

Otherwise, the pain of the wounds inflicted by “the other” will continue to haunt all prospects for a resolution.

Finally –  the question of the effect on North Cyprus property values, either with a yes or no vote in any referendum. Please note, that what follows is the personal opinion and observations of the NCI team.  Many informed investors are currently investing hard in North Cyprus – particularly in Kyrenia and Famagusta cities, with prices rising steadily. So why is this?  It is presumed that in the reunification scenario the lower prices in the north would rise to equal the higher values of the south. No hope of reunification?  Then investors see this as a win-win scenario. Clarity of another kind will emerge and the North Cyprus Property market will stabilise and prices continue to rise. 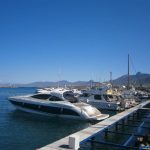 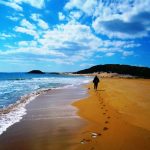