If you visit just one area of Northern Cyprus it is most likely to be one of the 5 Best Places to Visit in Kyrenia, well-known town of Kyrenia (in Turkish – Girne) and nearby Bellapais (Turkish – Beylerbeyi) on the North Coast of the island just 15 minutes north of the capital Nicosia (Turkish – Lefkosa).  Kyrenia directly faces mainland Turkey, which on a clear day can be easily seen in the distance from the hillside above the town.   Heartbreakingly picturesque with the Besparmak (Turkish – Five Finger) mountains rising sharply up behind it capped by the ancient St. Hilarion Crusader Castle which is floodlit at night. With its famous harbour and also Kyrenia castle, this area contains the best known of North Cyprus’ historic and cultural attractions, including nearby Bellapais Village with its famous mountainside Abbey and Music Festival.  All this is complemented by a good supply of local quality shopping, dining, hotels and casinos (from 1 – 5 star) and a quaint, ex-colonial feel with many British colonial buildings.  Modern leisure and golfing facilities at the Korineum 18 hole golf course as well as a sandy Alagadi Turtle Beach are within a 20-minute drive.

1. Kyrenia Harbour and back streets 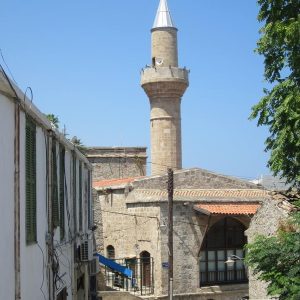 With its quaint cobbled streets, backstreet shops, traditional wooden ships and yachts, waterfront cafes and restaurants housed in its historic stone and former colonial buildings – it is easy to see why charming and historic Kyrenia town has earned the title of “the jewel of the Mediterranean” . Kyrenia harbour has an old-world atmosphere which even the flocks of summer tourists can never take away.

If you are driving yourself to Kyrenia harbour, don’t try to drive all the way down to the harbour itself since there is extremely limited parking beside the castle, and the harbourfront itself is pedestrianised. Park either in the main municipality car park in Kyrenia centre or in the smaller car park by the old colonial St. Andrew’s church. You can then walk down to the harbour on the newly cobbled steep hill passage, past the old Agha Cafer Pasha Mosque, to the very centre of the harbour.

Kyrenia harbour used to be the base for the export of the important Cyprus crop of Carob – and many of the waterfront restaurants are housed in converted stone carob storehouses. It is still a working harbour with moorings, but a good proportion of the boats you see today are wooden day-trip vessels- and one or two are used as floating cafes! At its West End, you will find the useful North Cyprus Tourist Office, actually housed in a restored Venetian building. There are a couple of reasonably priced hotels (The White Pearl and the British Hotel offering low-cost rooms with fabulous harbour views with private balconies – though bear in mind you will need to drop off bags or carry them there from the car parks if you stay right on the harbour. The rooftop Indian Restaurant in the White Pearl Hotel has a 360-degree harbour view and is worth a visit. For the most luxurious five star hotels and casinos, try the famous Colony Hotel in the centre or the well-known Rocks Hotel near the harbour. 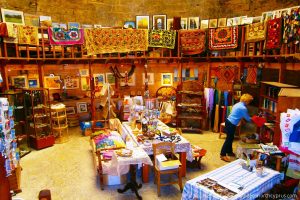 There are some fabulous restaurants in Kyrenia, although some regular Kyrenia visitors tend to avoid eating on the harbour front itself due to the premium on meal prices. Even so, it is a great place to enjoy an evening drink and watch the lights glisten on the sea. The best- known restaurant is Niazis near the Dome Hotel heading west away from the harbour– where you will also find a good casino. For lower cost, budget meals, there are excellent soup (Turkish – Corba) and Kebab houses down the backstreets, as well as pubs, restaurants and cafes of all types.

Towards the centre of the harbour you currently find souvenir and jewellery shops plus a paragliding centre – and ahead you will find a row of traditional wooden boats offering day boat trips with lunch along the North Cyprus coastline. For the best shopping in Kyrenia – walk away from the harbour up to the one-way road which runs parallel to it – on which you will find a good array of craft, jewellery (gold and silver), fashion and other shops and bazaars. Of particular interest is the “Round Tower” craft shop, built in one of the original Castle towers, as well as the restored “Bandabulya” market and café next to the tower, which was originally a covered market built by the British. 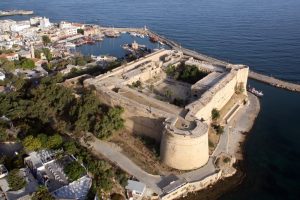 The Kyrenia Castle is extremely impressive with almost perfectly preserved castle walls and Venetian Tower plus original drawbridge, over which you walk to enter the castle. The Kyrenia Castle ticket office is accessed via stone steps from the harbour. In the ticket office, you can request an English language guide at little or no extra cost – highly recommended.

Once inside the castle, there are a variety of attractions for visitors of all ages. The ramparts offer fabulous views of the surrounding mountains, town and coastline. The dungeons are worth a visit – children not prone to nightmares can gasp at full-scale reproductions of poor victims previously imprisoned or tortured – some even tied up on torture wheels! The huge central courtyard is occasionally used for concerts. At the far end is a simple cafe, souvenir shop and toilets. The Shipwreck Museum inside Kyrenia Castle officially houses the oldest shipwreck display in the world – a 2,300 year old Greek trading vessel, along with its complete cargo. It was first discovered in 1965 2km off the coast of Kyrenia – and it is quite amazing to see the original wine amphorae, millstones and almond cargo – still almost perfectly preserved. 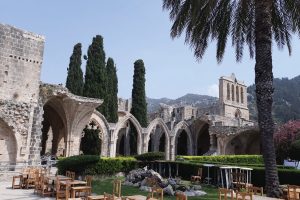 Bellapais (Turkish – Beylerbeyi) with its famous Bellapais Abbey is a short 5km (10 minute) drive or Dolmus (Bus) journey from central Kyrenia up the hill and into Bellapais village – and no visit to North Cyprus would be complete without seeing this quaint village and its classic Gothic Abbey perched on the hillside overlooking the Mediterranean.

This breath-taking 13th Century Abbey acts as a beacon for those in search of beauty, history and culture in the North Cyprus Kyrenia area. It is known to be the best preserved and most beautiful Gothic building in the Near East – exuding almost mystical sense of peace and tranquillity. Today the Abbey site is used as a cultural centre for artistic, musical and dramatic performances (including the Bellapais International Music Festival). A very romantic site, with lovely Kybele restaurant in the grounds, this atmospheric village and Abbey is the site for many weddings and receptions. The word Bellapais is taken from the French “Abbey of Peace”.

The Abbey is open until around 3.30pm in the winter and 7pm in the summer – but make sure you arrive at least half an hour prior to closing time. Entrance is 9TL – multi-lingual guides are available and well worth taking with you on your tour their huge depth of knowledge on your first visit. To reach Bellapais, follow signs to Bellapais (Beylerbeyi) at the traffic lights on the easterly side of the main Kyrenia ring road then right at the first roundabout and head up the hill through an impressive collection of new villas. The road will eventually lead you into the little square in front of the Abbey with its cluster of cafes and craft shops. The main car park right at the end of the road (3TL) provides a fabulous view of the whole of the North coastline and mountain range as well as a good view into the Abbey under croft.

In the Bellapais village, you can enjoy a meal or cup of Turkish tea under the original “Tree of Idleness” – so named by famous British author Lawrence Durrell who lived in the village in the 1950s and 60s and wrote his well-known “Bitter Lemons of Cyprus” novel sitting under that very tree. There are lovely craft shops with examples of Turkish linen, scarves, glassware, chinaware and other traditional Turkish Cypriot souvenirs. The best restaurant is undoubtedly the Bellapais Gardens hotel and restaurant, which attracts international celebrities with its fabulous cuisine and amazing views – and can be accessed down a steep cobbled street which turns left off the main road into the village. 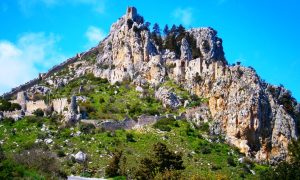 A short drive up the hill and out of Kyrenia – at 732 m above the sea and perched on top of the Besparmak mountain range, the St. Hilarion Castle is absolutely breath-taking and affords potentially at least half a day of great exercise scrambling up the hundreds of stone steps to the top. The steep drive up to the castle is not recommended for those with a fear of heights, but once you reach the car park you will be glad you made the effort.

To reach St. Hilarion Castle – drive first up the hill out of Kyrenia towards Bogaz on the main Lefkosa road, but as you reach the plateau, take the right hand turning to the castle. If you don’t have a car, the taxi ride will not be expensive. Make sure to go early in the summer (it opens at 8am) and also before 2,30pm at the latest in the winter, when the site closes at 3.30pm in the cooler months. Drive up the windy access road past the army base and as you round the final bend, the sight of St. Hilarion will quite frankly take your breath away.

The views of Kyrenia and the Five Finger Mountains, particularly from the very top, are the most elevated and spectacular of anywhere in North Cyprus. Please note, the full climb is most suited for the spring or autumn and NOT for the hotter summer months unless you start very early in the day. Take strong shoes and plenty of water or other drinks if going when the weather is hot. There are exhibitions, cafes and little shops built into the site. It is said that Walt Disney based his Sleeping Beauty Castle on this most idyllic and well preserved of the three North Cyprus crusader castles – the other two are Buffavento and Kantara (Karpas). 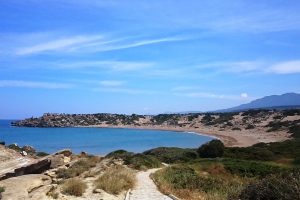 Unlike some other Mediterranean resorts, there are no beaches or swimming in the centre of Kyrenia town as the coastline immediately around the town is rocky and built up with hotels and restaurants. But the beaches are never far away. You will only need to drive only 5-10 minutes out of town to one of the free or hotel beaches – or visitors can take a day trip to one of the amazing unspoilt sandy beaches in the Karpas Peninsula.

The best known long stretch of golden sandy beach close to Kyrenia is the Algadi (Turtle) Beach going east. This is free of charge and is also a famous Turtle nesting site. Unlike the paying beach clubs (such as the Escape Beach Club going west from Kyrenia) there are just basic facilities, but there is a restaurant on the beach and some showers and toilets. This is where you will find locals having their picnics on the beach –and in addition during the summer months you will see the round cages on the beach protecting the Turtle eggs which hatch out at night during the summer

Older or teenage children looking for some excitement in the summer months can think about signing up for the North Cyprus Turtle Project as hatchling volunteers (spending the night with sleeping bags on the beaches to help protect the hatchling turtles!). The Goat shed Turtle HQ in Algadi Village (past the St. Kathleen’s restaurant) is worth a visit to meet the British University Turtle Project volunteers, buy Turtle T-shirts and other souvenirs to support the Exeter University run project – and maybe even see a baby turtle!

?> North Cyprus Apartment – your NEW guide on how to choose. 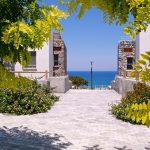 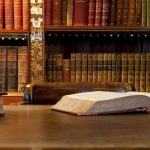 Setting up Power of Attorney in North Cyprus